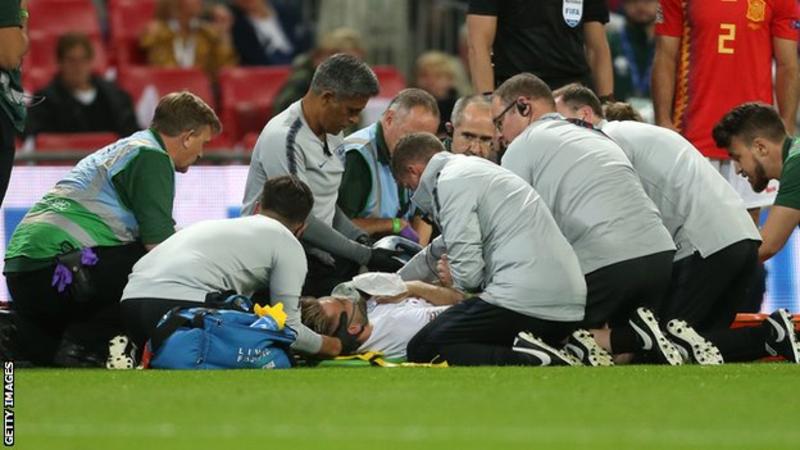 England defender Luke Shaw says he is “doing fine” after suffering a head injury in England’s 2-1 defeat by Spain in the Nations League at Wembley.

The Manchester United defender was carried off on a stretcher early in the second half after receiving treatment for close to seven minutes.

He was treated by more than 10 members of the medical team.

“Thank for for all the love and support,” Shaw posted on Twitter. “I am doing fine and in the best hands.”

After Saturday’s game, England manager Gareth Southgate said: “Luke is up and talking and needs to be assessed.”

Shaw, 23, was making his first England appearance since March 2017 and set up Marcus Rashford’s goal.

But he collided with Spain right-back Dani Carvajal while challenging for an aerial ball and landed heavily just after half-time.

He has established himself as first-choice left-back at Manchester United this season, playing every minute of the club’s opening four Premier League fixtures.

This has followed some serious injury problems in the past, including breaking his leg in two places during a Champions League game against PSV Eindhoven in 2015, which sidelined him for 11 months.

This week, he admitted he “nearly lost” his leg as a result of the injury.

He also missed two months of the 2016-17 campaign with a groin injury, while two foot operations ended his season early and delayed his start to the next season.