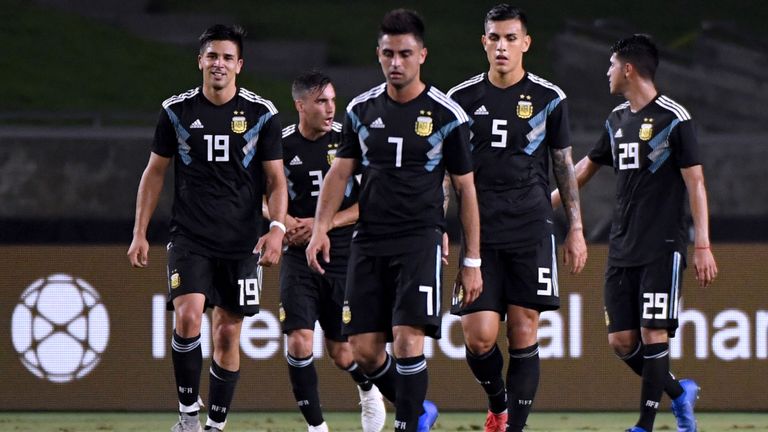 Argentina beat Guatemala 3-0 in a friendly international at the Los Angeles Coliseum on Friday evening, with Giovanni Simeone – son of Diego Simeone – scoring on his debut for his country.

The South Americans, who had Lionel Scaloni in temporary charge, scored all their goals before the break, taking the lead thanks to Gonzalo Martinez’s penalty just before the half-hour mark.

Also in friendly action on Friday night were Brazil, who put their World Cup disappointment behind them as they overpowered a youthful USA side 2-0.

Tite put out a strong Brazil outfit for the friendly in New Jersey with a front line of Neymar, Roberto Firmino and Douglas Costa.

And it was the latter pair who combined for the opening goal after 11 minutes: Costa getting the better of Antonee Robinson down the right flank, before the Juventus man set up an easy chance for Firmino.

The lead was doubled in controversial circumstances just before half-time, new Liverpool midfielder Fabinho falling in the box and a soft penalty being given which Neymar dispatched.

It was the Paris Saint-Germain striker’s 57th goal for his country in 91 appearances and came off the back of a relatively barren World Cup, where the world’s most expensive footballer only found the net twice.

Brazil were sent home at the hands of Belgium at the quarter-final stage in Russia 2-1, with 13 players remaining in the squad for a pair of friendlies.

This included the back line of Filipe Luis, Marquinhos and Thiago Silva, who were joined in defence by Fabinho and managed to quell the infrequent attacks from Dave Sarachan’s side.

The pace of the game slowed down at the hour mark – with Brazil making use of all the permitted six substitutes to bring on Willian and give debuts to Richarlison and Lucas Paqueta.

And Brazil held firm despite the USA trying in vain to find space in their opponent’s half and saw out a comfortable win at the MetLife Stadium.

Elsewhere, Uruguay thrashed Mexico 4-1 at the NRG Stadium thanks to a first-half double from Barcelona forward Luis Suarez, the second coming from the penalty spot.

And finally on Friday, Ecuador beat Jamaica 2-0 and Radamel Falcao netted as Colombia came from behind to overcome Venezuela 2-1.